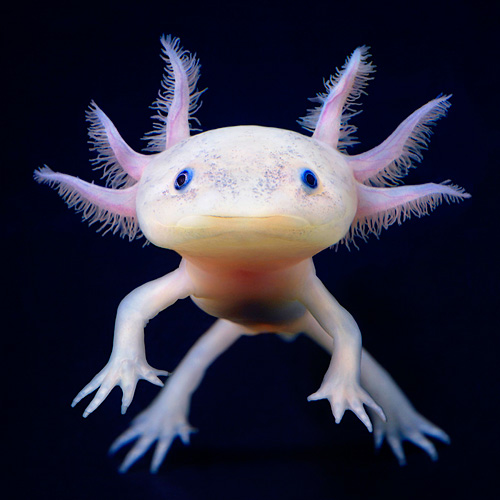 The axolotl also known as a Mexican salamander (Ambystoma mexicanum) or a Mexican walking fish, is a neotenic salamander, closely related to the tiger salamander.  Although the axolotl is colloquially known as a “walking fish”, it is not a fish, but an amphibian. The species originates from numerous lakes, such as Lake Xochimilco underlying Mexico City. Axolotls are unusual among amphibians in that they reach adulthood without undergoing metamorphosis. Instead of developing lungs and taking to land, the adults remain aquatic and gilled.

Axolotls should not be confused with waterdogs, the larval stage of the closely related tiger salamanders (A. tigrinum and A. mavortium), which are widespread in much of North America and occasionally become neotenic. Neither should they be confused with mudpuppies(Necturus spp.), fully aquatic salamanders which are not closely related to the axolotl but bear a superficial resemblance.

As of 2010, wild axolotls were near extinction due to urbanization in Mexico City and consequent water pollution. They are currently listed by CITES as an endangered species and by IUCN as critically endangered in the wild, with a decreasing population. Axolotls are used extensively in scientific research due to their ability to regenerate limbs. Axolotls were also sold as food in Mexican markets and were a staple in the Aztec diet.

Their heads are wide, and their eyes are lidless. Their limbs are underdeveloped and possess long, thin digits. Males are identified by their swollen cloacae lined with papillae, while females are noticeable for their wider bodies full of eggs. Three pairs of external gill stalks (rami) originate behind their heads and are used to move oxygenated water. The external gill rami are lined with filaments (fimbriae) to increase surface area for gas exchange.[citation needed] Four gill slits lined with gill rakers are hidden underneath the external gills.

Axolotls have barely visible vestigial teeth, which would have developed during metamorphosis. The primary method of feeding is by suction, during which their rakers interlock to close the gill slits. External gills are used for respiration, although buccal pumping (gulping air from the surface) may also be used to provide oxygen to their lungs. Axolotls have four different colours, including two mutant colors. The two normal colors are “wildtype” (varying shades of brown usually with spots) and melanoid (black). The two mutant colors are leucistic (pale pink with black eyes) and albino (golden, tan or pale pink with pink eyes) 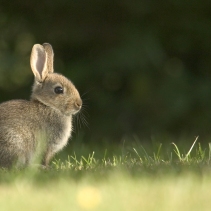